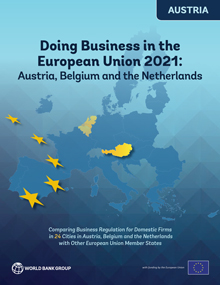 Where is it easier to do business in Austria?

Note: Data for Vienna, as well as for comparator economies and regional averages, are not considered official until published in the Doing Business 2021 report.

How would a location's ranking change if it reformed? See the impact of reforms by using the ranking simulator for Austria (Excel, 21KB) to change indicator values. This exercise assumes that other cities do not reform.

View brief summary of business reforms recorded at the national level by the global Doing Business in Austria in recent years.

See who contributed to the subnational report in the Doing Business in the European Union 2021: Austria.